So I’ve been pondering over this drive of Demonetization by Modi Government projected as a surgical strike on black money that started on the 8th of November, 2016 in India. At first, it seemed very rosy and bloomy, plenty of patriotism and support is still seen overflowing from the masses on this very big and historic decision against Black Money in India.

Come to think of it, it’s a humongous make or break decision. BJP stands to lose all the trust people have in them and a major portion of their vote bank, should this drive backfire. And I must say, it must’ve taken a lot of courage for Modi & their government to implement this.

Now let’s jump to what I’ve been thinking about this whole melodrama. Small people like you and me have been lauding this step because this looks to be the ultimate noose till date on Black Money. But the question is, is it really gonna work?

People are seen nationwide forming queues as long as a few kilometres outside so many Banks & ATMs. Facing all this trouble to do their bit for the nation in destroying the Black Money, that is weighing down on our economy & growth.

So where did it actually go wrong ?

Agreed, that this demonetization move is a big blow to Black Money hoarders, at least that is what most of us are believing. But while we all are stuck between the 4000 Rs a day & 24000 Rs a week,  do we really know what is going on behind the scene? 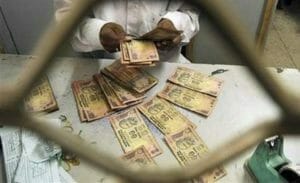 Rumor has it, some bankers are doing their bit by exchanging heaps of black money from the back end using fake IDs in bulk (Driving License, PAN card, Aadhaar card, etc), so a person with lots of black cash gets new currency notes (say 100 fake IDs x Rs 4000 per ID per day = Rs 4 Lakhs converted into new notes per day………what!!!!) at a very nominal loss of 10-20%. Bad deal ??? naehhh !

You go to a jeweller and buy as much gold as you want using Black Money, that is what a lot of people did in the initial week of the drive. Gold prices soared upto Rs 50-60K per 10gms and black money holders still purchased it. Even after the Rs 2.5 lakh gold purchase limit per person, who can stop a jeweller from selling gold in back dated bills & show multiple small value sale entries instead of one big sale entry above Rs 2.5 lakh.

Forex….how could we forget that. People bought US dollar currency for upto Rs 110 per dollar. Pretty costly eh ! But still better than letting your hard earned black money go down the drain.( biggg…pun intended! )

Oh wait, we forgot the Black Money Haven – Real Estate. You might be surprised to hear but builders & companies who have cash on hand in their finance books are charging a premium and helping people make their black money white with post dated cheques, which they would take back in 3-6 months in exchange of new currency.

It has also been reported in a few places that black money holding employers have given their employees advance salaries for 3-6 months in CASH, so that they can get rid of upto Rs 2.5 Lakhs per employee while maintaining status quo as their expenses have been paid out. (salary Rs 20K/month X 3 months X 50 employees = Rs 30 Lakhs black money sorted & poor employees wont utter a word out of fear of losing their jobs) Einstein smart….nope?

Well point to be remembered is that govt has introduced the “benami deposit” rule under which the ones taking money in cash also become criminals and can be jailed for upto 7 years if caught. So if you or someone known to you helped someone get away with this crime, Watch your Back !

While it has been a gala time for major e-wallets like Paytm, Freecharge & Mobikwik with a considerable usage surge in the event of cash shortage, I still feel bad for the millions who are stuck in lines at the ATMs & banks because they’ve still not taken the digital leap or unable to do so due to other reasons. After all, who wants to stand in queues at 1 am on a cold freezing night instead of sleeping in their homes.

So essentially, a big portion of Black Money just exchanged hands. Those who had lots of it lost 30-40% of it and the others have it now. Still I don’t think the move of Demonetization is that bad for the economy. In the long run a lot of positive effects will be seen. There will be a considerable drop in artificial inflation and the parallel black economy. Hawala & fake currency rackets died in a snap & so did terrorism funding (the news about the prevailing peace in J&K says it all).

Currently the IT & ED are both working extensively hard & constantly catching big fishes who have exploited this drive and helped Black Money holders in converting their old currency. The work done by them is commendable and keeps the hope alive that this nation is on the right path to get rid of corruption.

With over 90% notes in the form of Rs 500 & Rs 1000 already deposited back in the banking system, latest RBI update says non KYC completed bank account holders would need to fill a declaration for all deposits made over Rs 5000 & it can be made only once. smart move!

Personally, I feel the implementation of demonetization could’ve been a lot more strategic ( so as to leave fewer exit loopholes ) & more planned ( so that the common man suffered less ). That said, I’ll leave you with the most favorite sight of the last month.

Do share this article if you like it & let me know your views in the comments below !

Welcome to Awesomeness !Demonetization : Surgical strike on Black Money – Really?How Google Can Be Dangerous for Your Business? Ask Appsumo
We use cookies on our website to give you the most relevant experience by remembering your preferences and repeat visits. By clicking “Accept”, you consent to the use of ALL the cookies.
Do not sell my personal information.
Cookie SettingsACCEPT
Manage consent

This website uses cookies to improve your experience while you navigate through the website. Out of these, the cookies that are categorized as necessary are stored on your browser as they are essential for the working of basic functionalities of the website. We also use third-party cookies that help us analyze and understand how you use this website. These cookies will be stored in your browser only with your consent. You also have the option to opt-out of these cookies. But opting out of some of these cookies may affect your browsing experience.
Necessary Always Enabled
Necessary cookies are absolutely essential for the website to function properly. These cookies ensure basic functionalities and security features of the website, anonymously.
Functional
Functional cookies help to perform certain functionalities like sharing the content of the website on social media platforms, collect feedbacks, and other third-party features.
Performance
Performance cookies are used to understand and analyze the key performance indexes of the website which helps in delivering a better user experience for the visitors.
Analytics
Analytical cookies are used to understand how visitors interact with the website. These cookies help provide information on metrics the number of visitors, bounce rate, traffic source, etc.
Advertisement
Advertisement cookies are used to provide visitors with relevant ads and marketing campaigns. These cookies track visitors across websites and collect information to provide customized ads.
Others
Other uncategorized cookies are those that are being analyzed and have not been classified into a category as yet.
SAVE & ACCEPT